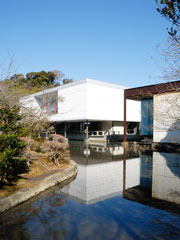 The Museum of Modern Art, Kamakura (former Kamakura Museum) situated in the precincts of the Tsurugaoka Hachimangu shrine at Yukinoshita of Kamakura city opened its doors in 1951 as the first public modern art museum in Japan. It was designed by Junzo Sakakura (1901 -1969), a cherished disciple of Le Corbusier, the most prominent architect of the 20th century. The building is in perfect harmony with the historical environment of Hachimangu and is internationally famous as an architecture representing modern and contemporary Japan. In 1999, it was amongst the 20 selected architectures of modern Japan by DOCOMOMO (Documentation and Conservation of buildings, sites and neighborhoods of the Modern Movement). The appealing aspect of the building and its environment more than compensated for the lack of facilities (such as elevators).

The Museum od Modern Art, Kamakura closed on March 31, 2016. We will continue introducing about its architecture and activities done at the former Kamakura Museum on our website.