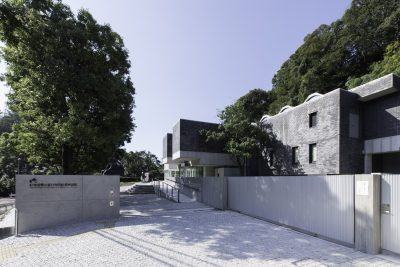 KAMAKURA ANNEX, which opened its doors in 1984, is situated 350 meters north of the KAMAKURA building (closed in March 2016). It was designed by OTAKA Masato (1923-2010) and was elaborately designed to blend in with the surrounding suburban landscape amongst the mountains. Is it over thirty years since its opening, the facilities and equipment at the Kamakura Annex undergo improvement work as they have deteriorated over the years. The Kamakura Annex was closed from September 2017 to September 2019 with the aim of replenishing the Museum's facilities and activities. The current renovations have seen the renewal of the exhibition gallery walls and a newly added café. The newly refurbished Kamakura Annex, which has re-opened on October 12, 2019, will be carrying on the history and tradition of the former Kamakura building, inheriting its ambition of regarding art from around the world with new eyes, while also making a fresh start.