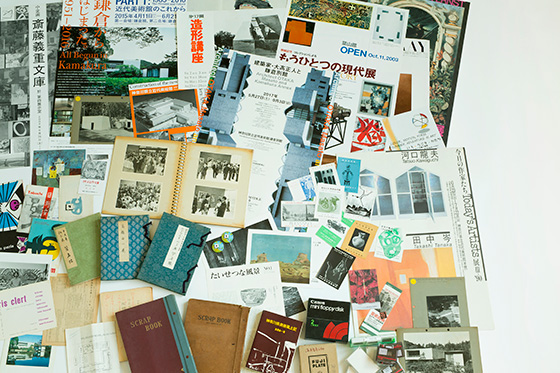 About The Museum of Modern Art, Kamakura & Hayama Archives

Having opened in 1951 as the first public museum of modern art in Japan, The Museum of Modern Art, Kamakura & Hayama spans a history of approximately seventy years from when the original Museum was built to the present. The number of exhibitions held at the three locations of Kamakura, Kamakura Annex, which opened in 1984, and Hayama, which opened in 2003, totals more than 700. In addition to introducing Japanese and foreign art through such exhibitions, a variety of lectures and other events have unfolded. Such activities carried out by the Museum could be considered important archives. Meanwhile, the Museum has also been collecting materials on the artists involved in such activities. Following the closure of the Kamakura Building in 2016, the Museum began putting such records of the past in order. They are scheduled to be presented as the Museum Archives when the Kamakura Annex reopens in October 2019 and the public will gradually be able to view and utilize them. Following the example of the concept of the “Museum of Unlimited Growth” proposed by Le Corbusier, who taught Junzo Sakakura, the architect who designed the former Kamakura Building, the Museum aims at “Archive of Unlimited Growth” centered on the following three activities.

Towards building up sustainable and open Archives:

- Accumulation and Collection -
Connecting people and history with the Museum as the nucleus.
- Classification and Preservation -
Preserving diverse materials appropriately to convey them to the future.
- Research and Application -
Setting up a database and dispatching the information extensively in Japan and abroad via the website etc.

*This is a silent video.

Should you wish to view or survey the archive materials, please apply via the enquiry form provided in the Museum website.

* This project was adopted by the Agency for Cultural Affairs as a “Fiscal 2018 Project to Promote Contemporary Japanese Art Abroad: Compilation of Materials towards a Strategical Dispatch of Contemporary Art in Japan to Foreign Countries.”