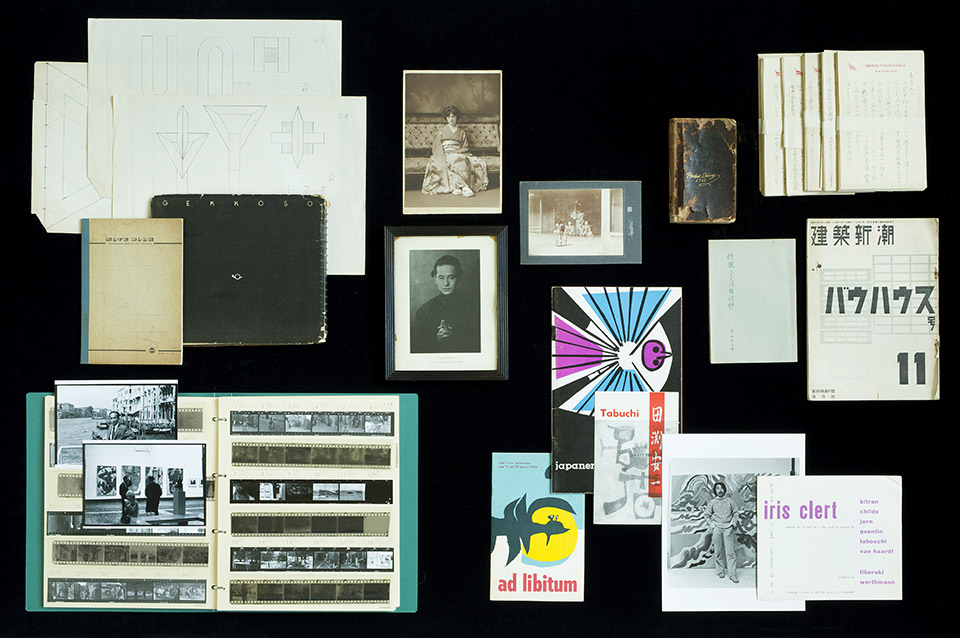 Records on artists whose works have been shown in exhibitions held at the Museum. There are individual archives comprising books formerly belonging to such artists, memos, notebooks, photographs, etc. regarding the process of producing works and artistic activities.

- Materials Formerly Belonging to Tamijuro Kume
Having interacted with the British poet Ezra Pound and been involved in Vorticism, evaluation of the painter Tamijuro Kume (1893-1923) has risen in recent years. There are approximately 40 matelialz, such as letters, photographs, and habitually used items.

- Materials Formerly Belonging to Yasukazu Tabuchi*
n addition to approximately 2,250 books, there are letters, notebooks, photographs, etc., which used to belong to Yasukazu Tabuchi (1921-2009), who went to France in 1951 and was active as an artist based in France from then on.

- The Masakazu Horiuti Library*
Materials on Masakazu Horiuti (1911-2001), a leading sculptor of abstract sculpture in postwar Japan. Diaries, notebooks, letters etc., and books which formerly belonged to Horiuti (altogether approximately 4,000 foreign books, Japanese books, magazines, etc.) were donated to the Museum by his bereaved family in 2016.

The materials marked with an asterisk and those listed below form a "Special Collection" and can be viewed in the Museum in the Hayama Building. (Application required in advance.)

Go to Search The Archives

Should you wish to view or survey the archive materials, please apply via the enquiry form provided in the Museum website.

* This project was adopted by the Agency for Cultural Affairs as a “Fiscal 2018 Project to Promote Contemporary Japanese Art Abroad: Compilation of Materials towards a Strategical Dispatch of Contemporary Art in Japan to Foreign Countries.”