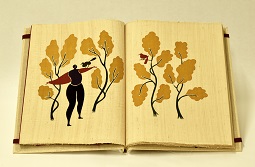 Beautiful BooksPublications by Yukawa Shobō and Prints from the Museum Collection

Yukawa Shobō was established by YUKAWA Seiichi (1937–2008) in 1969. Based in Osaka and then Kyoto, it published limited-edition books. The elaborate printing, design, and binding of the books this publisher produced enchanted many a bibliophile until the business closed in 2008. The charms of unique books produced in collaboration with enthusiastic artists such as the print artists OKADA Roshiw (b. 1949) and KARASAWA Hitoshi (b. 1950) or the textile artist MOCHIZUKI Michiaki (b. 1953) are presented through recent acquisitions. In addition, focusing on the relation between letters and pictures in print, there is also a display of wood engravings by KARASAWA Hitoshi. 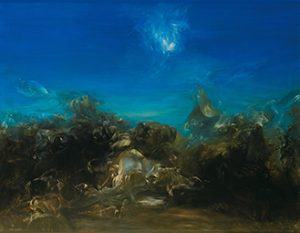 Yokoo TatsuhikoBeyond the Realm of Meditation

YOKOO Tatsuhiko (1928–2015) is a painter who worked coming and going between Japan and Europe. He held his solo exhibition in Switzerland in 1965. From then on, he achieved fame for his visionary paintings inspired by the Bible and mythology. From the 1980s onwards, he set up his base in Germany, where, influenced by Rudolf Steiner (1861-1925) and Zen thought, he incorporated meditation into his work and unfolded abstract paintings alluding to calligraphy. As this artist’s first retrospective in Japan, his artistic career is surveyed mainly through the works which were left in his studio in Japan. 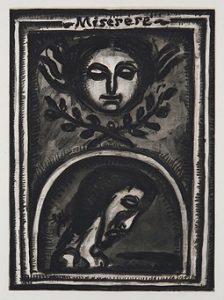 In conjunction with the retrospective of works by YOKOO Tatsuhiko, introduced here are copper engravings by Georges Rouault (1871–1958), by whom Yokoo was influenced. The profound works produced by repeatedly incising and hatching a copperplate, onto which the image has been photoengraved, are brimming with the deep spirituality with which Rouault pursued depths of the human mind. Shown here are Miserere (1922-27, published in 1948), a series of master monochrome copper engravings inspired by the death of Rouault’s father and World War I, and Passion (1936), which depicts the sufferings of Christ.